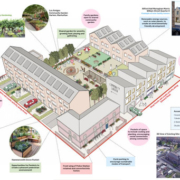 Balsall Heath – land and need but a lack of new homes

Balsall Heath in south Birmingham is an area with a lot of social capital, community organisations, community activity and more. It is part of the Balti Triangle, where the world famous and seriously delicious Birmingham Balti was born. But it is also a deprived area and there are a lot of plots of land which are unused or derelict, many with buildings on them.

At the same time there is real need for more affordable housing in the area. But like many other areas where potential sale and rentable values are low, private developers are not building new homes.

So two local organisations – JERICHO and the St Paul’s Community Development Trust – decided to look at how they could develop a scheme to both provide new affordable housing and also meet other aims around creating jobs, and supporting and skilling people up.

JERICHO and St Paul’s Community Development Trust are ideal organisations to lead this idea. JERICHO runs a range of social enterprises and projects to create change in the community. One of those projects is JERICHO family member company, Jericho Construction, a social enterprise professional construction company which gives employment opportunities to people who need them the most, including young people, ex-offenders and survivors of modern slavery. St Paul’s Community Development Trust came out of a desire of local people to create a better future for their children. Providing services in the area since 1968, they run various activities and services for individuals and families around education, recreation and lifelong learning. They want every child to have the best start in life and for everyone to be able to reach their full potential.

So in some ways, community led housing is an obvious space for them to join together in. With other partners, they decided to create a Community Land Trust which would itself become a developer of affordable housing and community owned facilities. And also provide a way to train up local people – including ex-offenders – giving them skills and employment opportunities. With a construction company on hand, Jericho Construction would be the builders. The vision includes the aspiration that out of such a project might come a new multi stakeholder building cooperative. Provisionally called the Birmingham Rebuilding Cooperative, it would give ex-offenders jobs and so would help break the cycle of re-offending and make the area safer.

So a steering committee for Balsall Heath Community Land Trust was established and the search for suitable sites started.

A number of potential sites looked promising to the embryonic CLT. Now, they are currently looking to develop a scheme on the site of Balsall Heath Police Station. This is a large site which is big enough to enable housing and community and commercial space. As policing changes shape a number of stations including this one have been identified for closure. Police and Crime Commissioners have been looking at how to dispose of the buildings and land. What could be more appropriate for a project which aims to make the community safer than an old police station?

The scheme is currently in the initial development stage. Architects have drawn up detailed plans which include keeping the front wing of the old police station alongside new build to create:

A full commercial appraisal of the scheme has been undertaken and a business plan is in development. The appraisal includes the cost of freehold purchase of the site. The scheme would be financed using a mixture of Homes England affordable homes finance, high street property finance, and potentially a community share offer, investment from social investors and other regeneration funding. Once built, revenue funding, including income and the money to pay back commercial mortgage payments, will come from rents, commercial space and also potentially from funding for the skills, training and education elements of the scheme. The commercial properties will make a contribution to economic development for the street.

There is an initial draft business plan in place for the scheme but the next milestone will be to gain agreement from the West Midlands Police and Crime Commissioner that the new CLT could have first refusal on the site. Once that is in place then a funding application will be made to the Community Housing Fund for the work to get the scheme as far as planning.

The CLT is in the process of confirming its legal structure and then will soon be set legally up, with a wider range of partners and local involvement. The scheme is also creating a partnership with Bournville Village Trust Housing Association which will manage the development once complete and people are living there.

Want to join the discussion?
Feel free to contribute!

If you would like to see community led housing flourish in the West Midlands, we’d love to hear from you! Talk to us about how to get involved, how we can help you or how we could work together.

We are a Community Benefit Society Registration number: 8098

This site uses cookies. By continuing to browse the site, you are agreeing to our use of cookies.

We may request cookies to be set on your device. We use cookies to let us know when you visit our websites, how you interact with us, to enrich your user experience, and to customize your relationship with our website.

Click on the different category headings to find out more. You can also change some of your preferences. Note that blocking some types of cookies may impact your experience on our websites and the services we are able to offer.

These cookies are strictly necessary to provide you with services available through our website and to use some of its features.

Because these cookies are strictly necessary to deliver the website, refuseing them will have impact how our site functions. You always can block or delete cookies by changing your browser settings and force blocking all cookies on this website. But this will always prompt you to accept/refuse cookies when revisiting our site.

We fully respect if you want to refuse cookies but to avoid asking you again and again kindly allow us to store a cookie for that. You are free to opt out any time or opt in for other cookies to get a better experience. If you refuse cookies we will remove all set cookies in our domain.

We provide you with a list of stored cookies on your computer in our domain so you can check what we stored. Due to security reasons we are not able to show or modify cookies from other domains. You can check these in your browser security settings.

We also use different external services like Google Webfonts, Google Maps, and external Video providers. Since these providers may collect personal data like your IP address we allow you to block them here. Please be aware that this might heavily reduce the functionality and appearance of our site. Changes will take effect once you reload the page.